We meet Ellie, who lives with her mum because her dad couldn’t deal with his daughter’s disability and found another wife. Funny enough is that disability that makes this book special to me since Ellie and I have the same condition. For those who don’t know, Cerebral palsy comes in many types and in different ways in which it can affect the body. One way, I try to explain CP to people is to think of a normal brain, but with a body that won’t move, it’s like there is a disconnect both the two.

From the way Ellie describe her condition, it seems that we share the same kind of Cerebral Palsy, which makes me feel closer to her. It all started when Ellie and her mum moved in with her grandparents because her granddad began showing early signs of dementia. Ellie is the queen of baking and not only that in my opinion, but she also uses baking as her coping mechanism.

Even when baking becomes painful to her, she still keeps going, which shows you that she’s determined not to let her situation getting in her way. I can understand why Ellie doesn’t want an aide, the kids stare at you more and if you ace a project or test some of your classmates say that you don’t deserve it because your aide gave you the answers. (Which they don’t or at least mine never did, and I had a few) that might lead to bullying.

I was curious about how the author got CP so spot on, so after searching, I found that she’s the mum of a son with this disability so, I’m sure she knows what she’s talking about. I gave Roll with It by Jamie Sumner a four out of five stars. (I don’t really know why but something in me didn’t want to give it five stars). 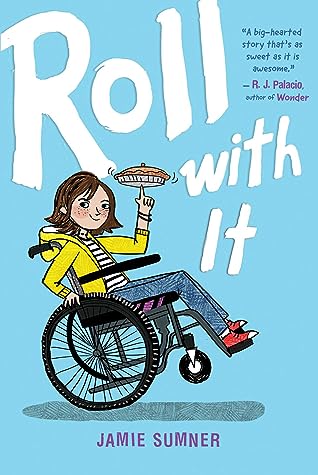 4 thoughts on “Roll with It by Jamie Sumner”