When I saw this book, I thought it’s going to be all butterflies and rainbows, but you dig into you see a very different story. On page one, we meet Rafael, who had no choice but to escape from his home at such a young age and live in the streets. It made me feel the fear of how unsafe the streets can be, especially when you have a darker skin tone. Luckily his sister stepped up and took him under her wind and back to school. Even if he’s now 19, it shows you that he didn’t give up and still wants to make something better of himself.

Akilah is a force to be working with, quite but ready to stand up for her rights. When she sees this nice boy in her class she wanted to know more. However, she’s still guarded and has a wall that people need to break to get to the real her. We see that she always had to take care of herself, which might explain the reason why she’s putting walls up because she doesn’t want to get hurt like in her past.

In this book we read about sexual abuse on a male which I feel isn’t as discussed in books as it should be. I felt it was a wake-up call and reminder to me and the world that sexual abuse can happen to anyone, no matter your gender. I saw the lovemaking and kindness between Akilah and Rafael as a way of the healing process with their past. I gave All the Little Things by B. Hollidae a four out of five stars. 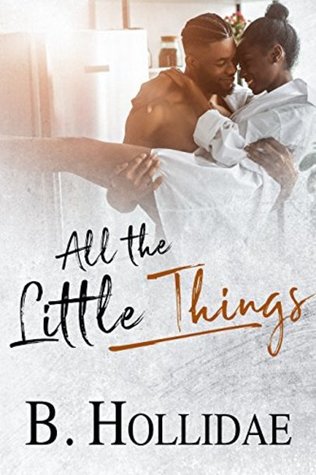 One thought on “All the Little Things by B. Hollidae”