Moving a guy as big as Keever wasn’t easy. It was like trying to wrestle a king-size mattress off a waterbed. So they buried him close to the house. Which made sense anyway. The harvest was still a month away, and a disturbance in a field would show up from the air. And they would use the air, for a guy like Keever. They would use search planes, and helicopters, and maybe even drones.

They started at midnight, which they thought was safe enough. They were in the middle of ten thousand acres of nothingness, and the only man-made structure their side of any horizon was the railroad track to the east, but midnight was five hours after the evening train and seven hours before the morning train. Therefore, no prying eyes. Their backhoe had four spotlights on a bar above the cab, the same way kids pimped their pick-up trucks, and together the four beams made a wide pool of halogen brightness. Therefore, visibility was not a problem either. They started the hole in the hog pen, which was a permanent disturbance all by itself. Each hog weighed two hundred pounds, and each hog had four feet. The dirt was always chewed up. Nothing to see from the air, not even with a thermal camera. The picture would white out instantly, from the steaming animals themselves, and their steaming piles and pools of waste.

Hogs were rooting animals, so they made sure the hole was deep. Which was not a problem either. Their backhoe’s arm was long, and it bit rhythmically, in fluent articulated seven-foot scoops, the hydraulic rams glinting in the electric light, the engine straining and roaring and pausing, the cab falling and rising, as each bucket-load was dumped aside. When the hole was done they backed the machine up and turned it around and used the front bucket to push Keever into his grave, scraping him, rolling him, covering his body with dirt, until finally it fell over the lip and thumped down into the electric shadows.

Only one thing went wrong, and it happened right then.

The evening train came through five hours late. The next morning they heard on the AM station that a broken locomotive had caused a jam a hundred miles south. But they didn’t know that at the time. All they heard was the mournful whistle at the distant crossing, and then all they could do was turn and stare, at the long lit cars rumbling past in the middle distance, one after the other, like a vision in a dream, seemingly forever. But eventually the train was gone, and the rails sang for a minute more, and then the tail light was swallowed by the midnight darkness, and they turned back to their task.

Twenty miles north the train slowed, and slowed, and then eased to a hissing stop, and the doors sucked open, and Jack Reacher stepped down to a concrete ramp in front of a grain elevator as big as an apartment house. To his left were four more elevators, all of them bigger than the first, and to his right was an enormous metal shed the size of an airplane hangar. There were vapor lights on poles, set at regular intervals, and they cut cones of yellow in the darkness. There was mist in the nighttime air, like a note on a calendar. The end of summer was coming. Fall was on its way.

Reacher stood still and behind him the train moved away without him, straining, grinding, settling to a slow rat-a-tat rhythm, and then accelerating, its building slipstream pulling at his clothes. He was the only passenger who had gotten out. Which was not surprising. The place was no kind of a commuter hub. It was all agricultural. What token passenger facilities it had were wedged between the last elevator and the huge shed, and were limited to a compact building, which seemed to have both a ticket window and benches for waiting. It was built in a traditional railroad style, and it looked like a child’s toy, temporarily set down between two shiny oil drums.

But on a sign board running its whole length was written the reason Reacher was there: Mother’s Rest. Which he had seen on a map, and which he thought was a great name for a railroad stop. He figured the line must cross an ancient wagon train trail, right there, where something had happened long ago. Maybe a young pregnant woman went into labor. The jostling could not have helped. Maybe the wagon train stopped for a couple of weeks. Or a month. Maybe someone remembered the place years later. A descendant, perhaps. A family legend. Maybe there was a one-room museum.

Or perhaps there was a sadder interpretation. Maybe they had buried a woman there. Too old to make it. In which case there would be a commemorative stone.

Either way Reacher figured he might as well find out. He had no place to go, and all the time in the world to get there, so detours cost him nothing. Which is why he got out of the train. To a sense of disappointment, initially. His expectations had been way off base. He had pictured a couple of dusty houses, and a lonely one-horse corral. And the one-room museum, maybe run part-time and volunteer by an old guy from one of the houses. Or the headstone, maybe marble, behind a square wrought-iron fence.

He had not expected the immense agricultural infrastructure. He should have, he supposed. Grain, meet the railroad. It had to be loaded somewhere. Billions of bushels and millions of tons each year. He stepped left and looked through a gap between structures. The view was dark, but he could sense a rough semicircle of habitation. Houses, obviously, for the depot workers. He could see lights, which he hoped were a motel, or a diner, or both.

He walked to the exit, skirting the pools of vapor light purely out of habit, but he saw that the last lamp was unavoidable, because it was set

One hint its a Lee Child book. 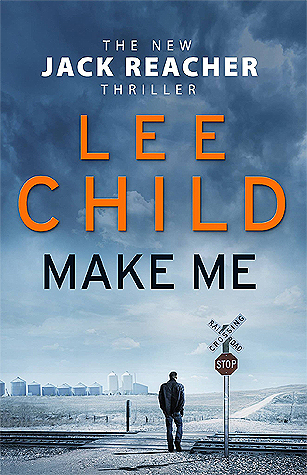 “Why is this town called Mother’s Rest?” That’s all Reacher wants to know. But no one will tell him. It’s a tiny place hidden in a thousand square miles of wheat fields, with a railroad stop, and sullen and watchful people, and a worried woman named Michelle Chang, who mistakes him for someone else: her missing partner in a private investigation she thinks must have started small and then turned lethal.

Reacher has no particular place to go, and all the time in the world to get there, and there’s something about Chang . . . so he teams up with her and starts to ask around. He thinks: How bad can this thing be? But before long he’s plunged into a desperate race through LA, Chicago, Phoenix, and San Francisco, and through the hidden parts of the internet, up against thugs and assassins every step of the way—right back to where he started, in Mother’s Rest, where he must confront the worst nightmare he could imagine.

Walking away would have been easier. But as always, Reacher’s rule is: If you want me to stop, you’re going to have to make me